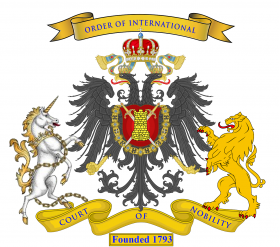 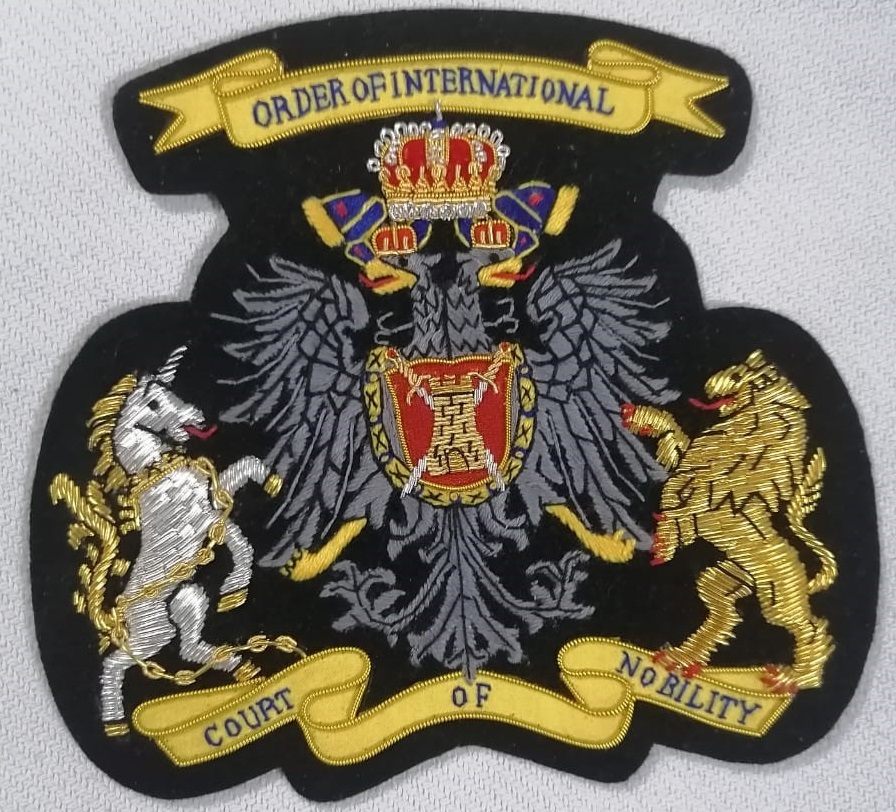 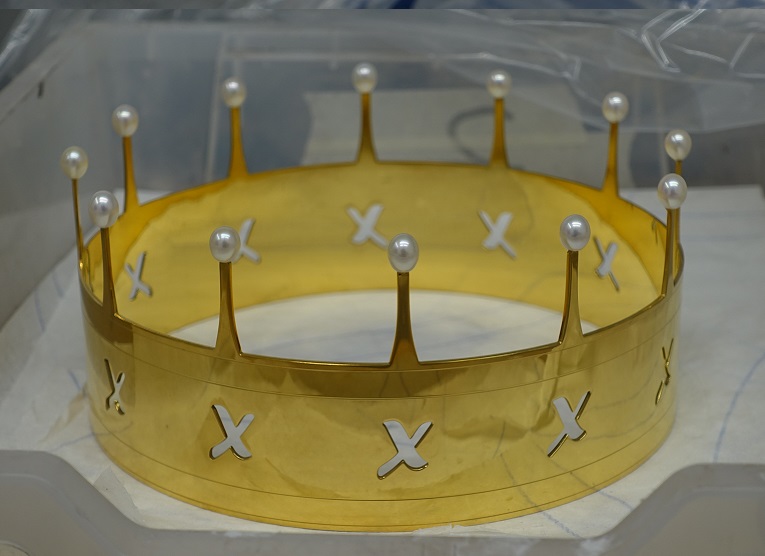 INCLUDES SOLID SILVER & GOLD CROWN
WITH REAL PEARLS.
INHERITABLE (HRH) Prince and Princess (All Children are Princes and Princesses)
- (MEMBERSHIP IS INCLUDED WITH THE TITLE)

ARE YOU A DESCENDANT OF NOBILITY OR ROYALTY?
YOU WOULD QUALIFY TO BE AWARDED THIS TITLE!
SEE ALL 10 REASONS TO QUALIFY BELOW:

1. Noble Ancestry 'Descendant of Nobility, Royalty or Feudal Title'
(We can do 'Historical Research' to find your noble ancestry - €500 = $463 deducted from this or any Title)

2. Heroism or Honourable Deeds
3. Charity work or donations to charity - (Receipt of your Donation to registered Charity to be accepted)
4. Local Community support, Politics, Government and Civil Servants
5. Industry, Entrepreneurs, Sport or Coaching (Website to be accepted)
6. Humanitarian, Volunteer work or Military Service

THIS TITLE IS GRANTED BY THE
"ORDER OF INTERNATIONAL COURT OF NOBILITY" (Originally founded 1793)
Only 5 Prince/Princess Titles are awarded each year "You could be one of them"?

PETITION DETAILS AT THE BOTTOM

HISTORY
Nobility has always had secret organizations that they belonged to, ever since the French revolution 1789, where the commoners sought to abolish nobility with fatal consequence's. They would meet in secret once a year bringing with them a bronze or silver plate which they put on the table and used to eat food off. A piece of bread was placed on the plate (to cover the crest, in case any uninvited persons came in) which all food was then served onto the bread, at the end of the meal the bread could be eaten or given to the poor. 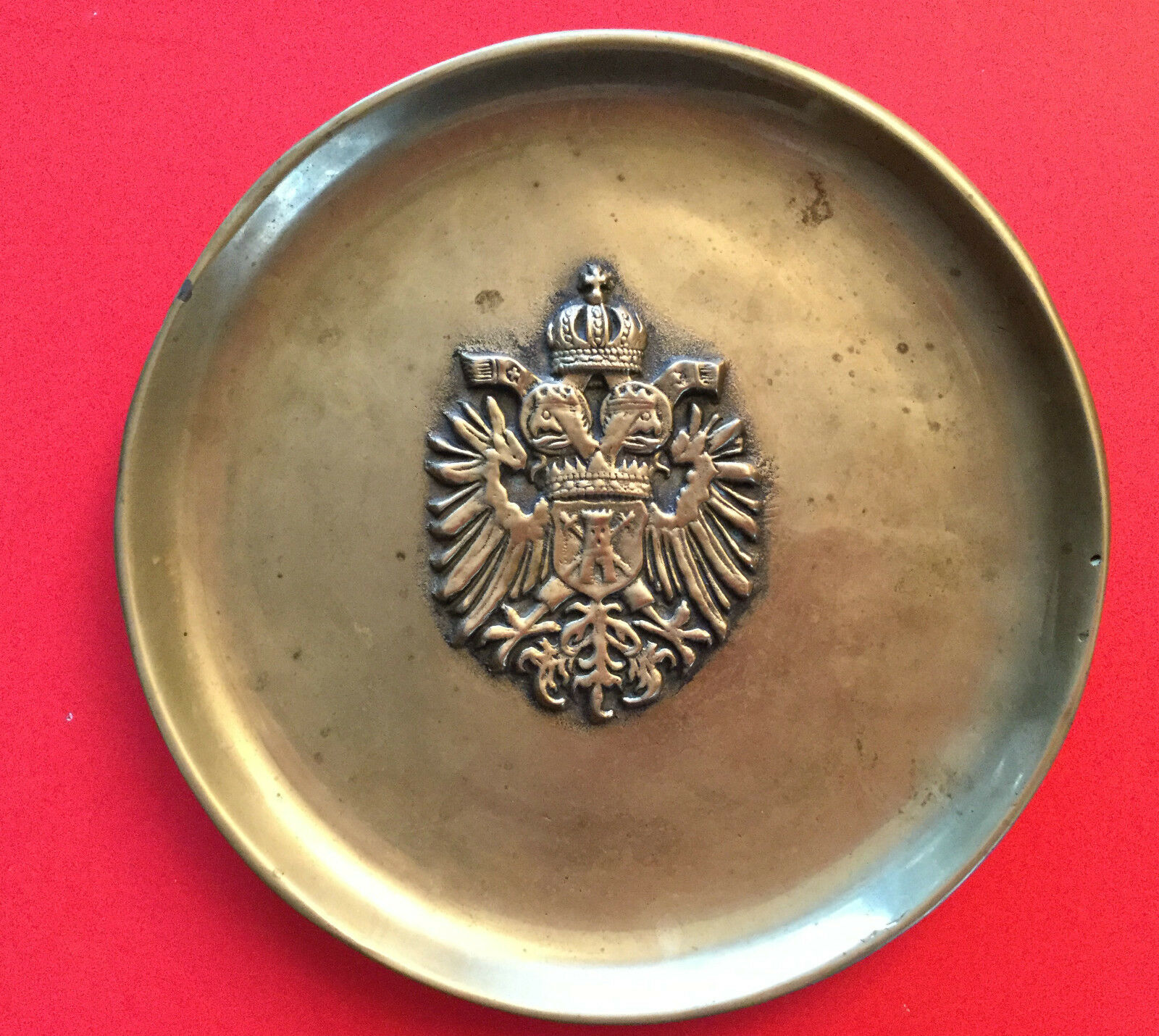 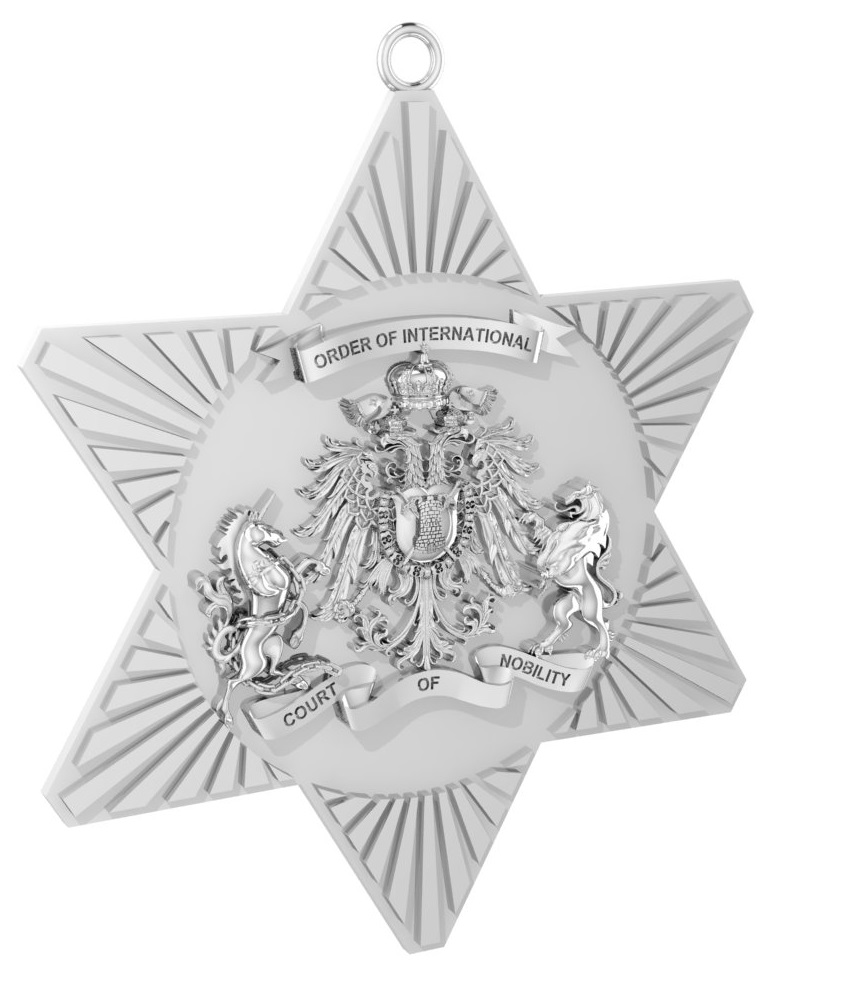 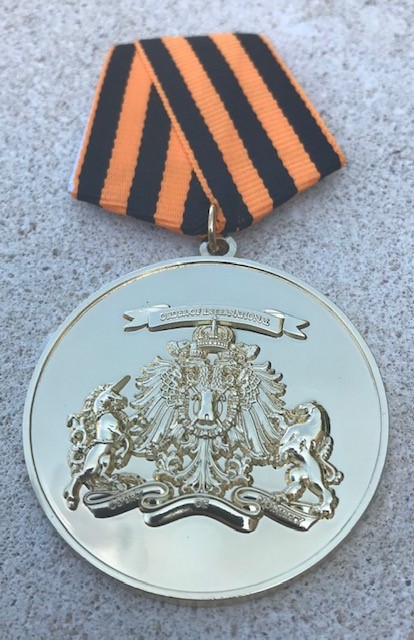 The plate symbolised that ‘Nobility Class’ would always be high society and eat well. It was a “membership Plate” (an old fashion membership card). Many secret high society Nobility associations, orders, and clubs were formed after 1806 with the dissolution  of the HOLY ROMAN EMPIRE by Emperor, Francis II of the House of Habsburg-Lorraine, he abdicated his title and released all imperial states and officials from their oaths and obligations to the empire.

We now live in a worldwide enlightened age where organisations and societies open their doors through the medium of the internet. It is no longer necessary to be secret yet security is most important. 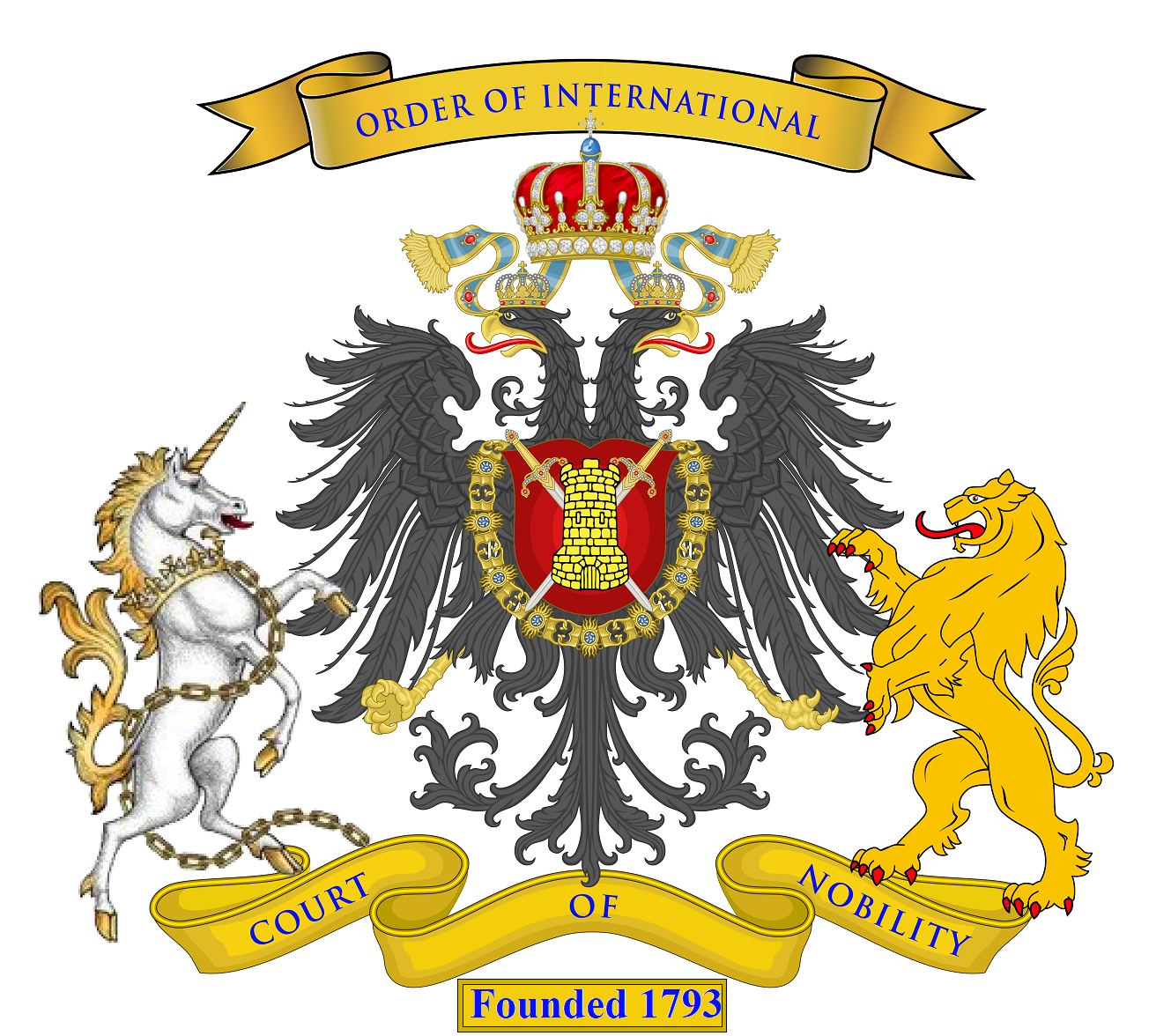 Double headed Eagle = Represents Holy Roman Empire
Lion and Unicorn = Represents Strength of Christ
Crowns = Represents the International Rulers
Castle = The castle signifies spiritual power and vigilance on the watch as well as home and safety. The tower is very similar to this and is an emblem of grandeur and society.
Swords =  2 crossed swords pointing down means the fight is over. The purpose of preservation of Nobility Class is over by existence of this Order.

Official Court Wax Seal = Does not have the Lion and Unicorn which demonstrates multi religious officialdom of authority. 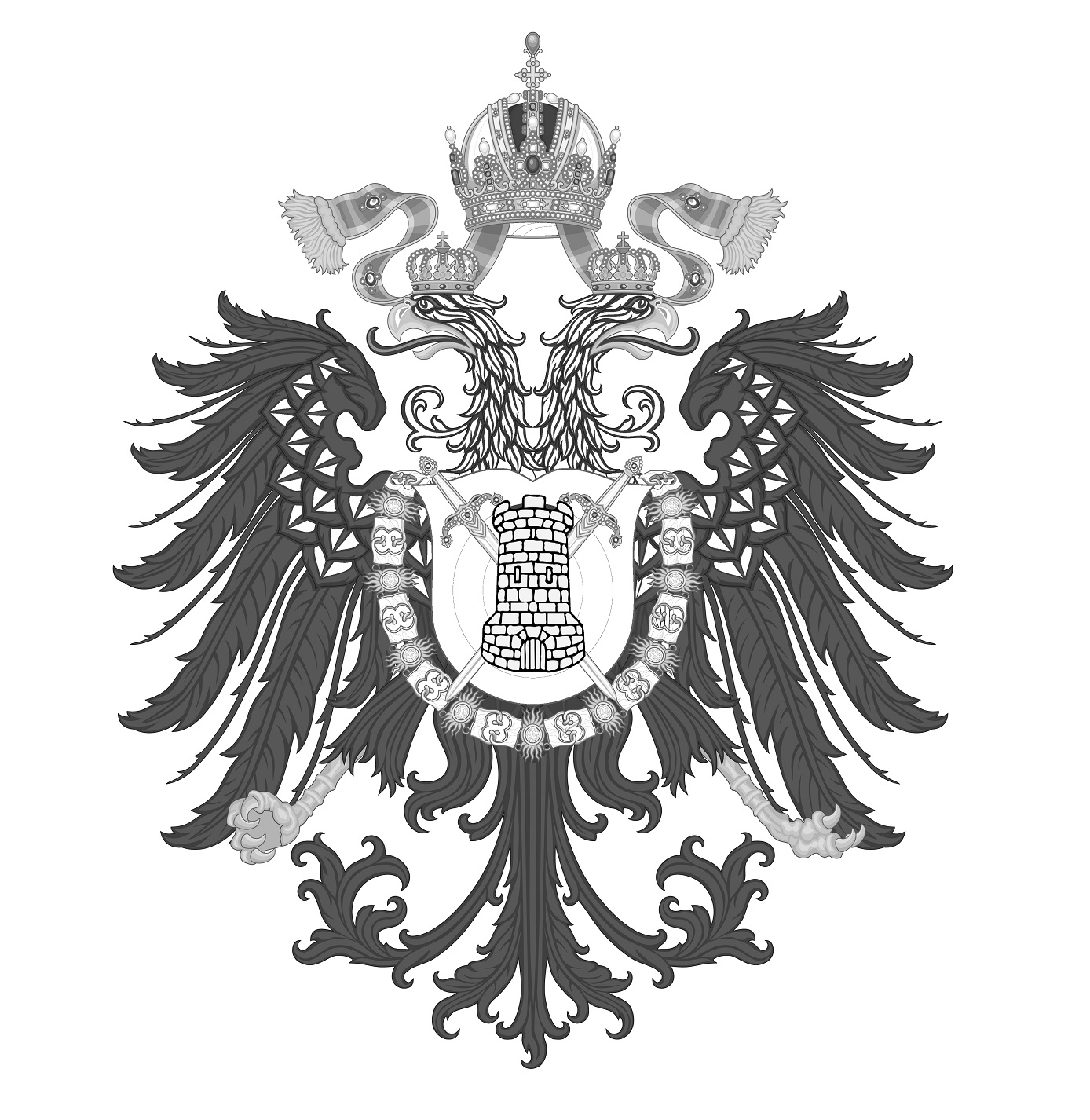 Background to the Order (originally founded 1793) 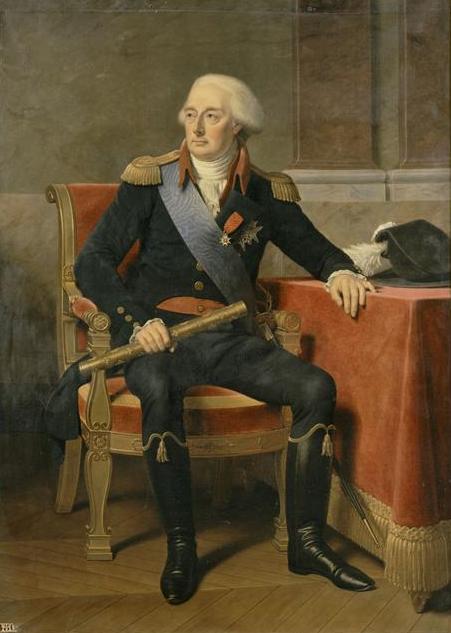 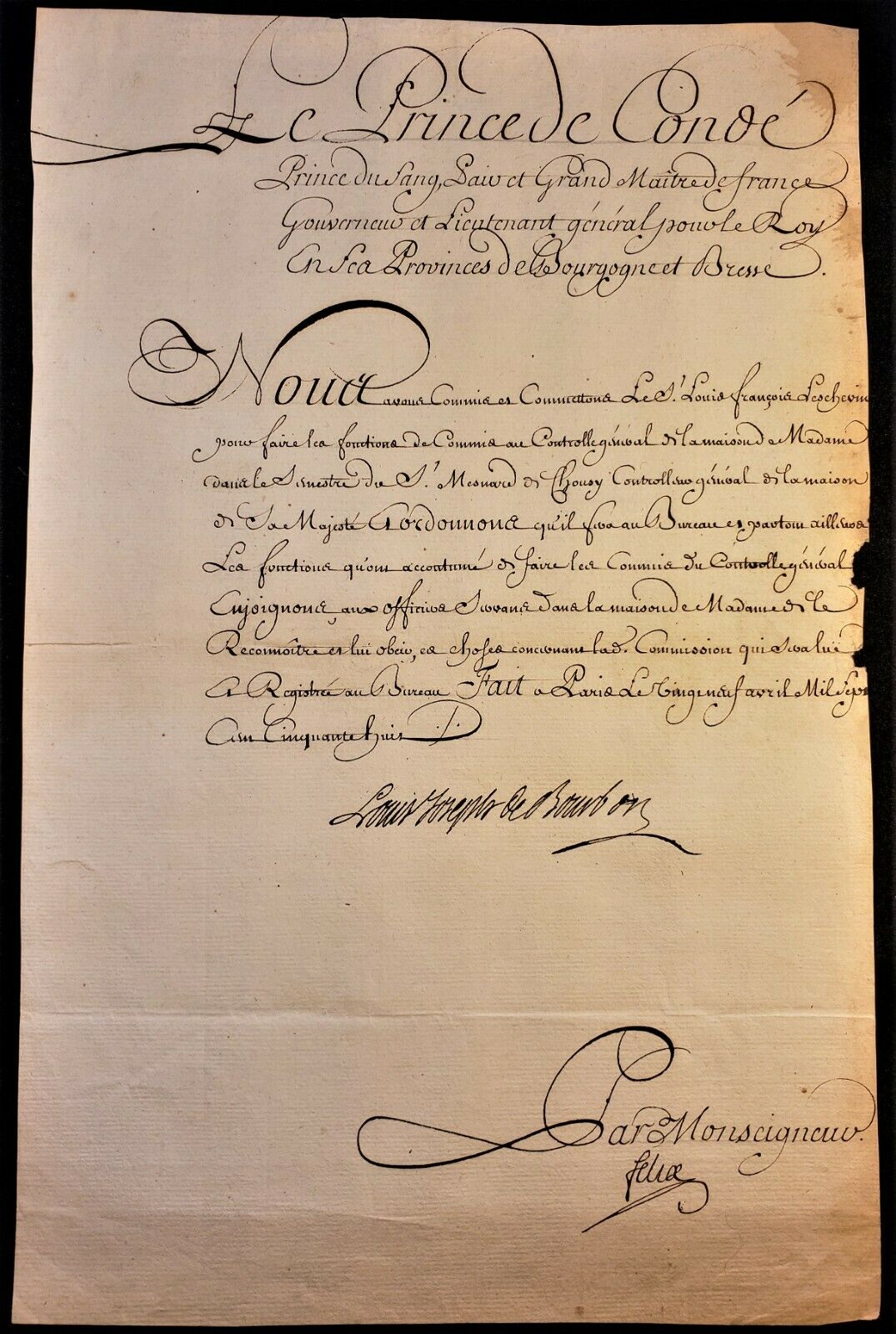 From the 'Order of International Court of Nobility' collection of historical documents.

Born on 9 August 1736 at Chantilly, Louis Joseph was the only son of Louis Henri I, Prince of Conde (1692–1740) and Landgravine Caroline Caroline of Hesse-Rotenburg (1714–41). As a cadet of the reigning House of Bourbon, he was a prince du sang.

Obtaining the rank of general, he fought in the Seven Years’ War with some distinction, serving alongside his father-in-law, the Prince of Soubise. He was also Governor of Burgundy.

Furthermore, the Prince was the leader of the Condé army of emigres. He used her great fortune to help finance the exiled French community's resistance movement.

Louis Joseph lived with his mistress Maria in France until the French revolution, when the couple left for Germany and then Great Britain. In 1795, Prince Honoré of Monaco died, and on 24 October 1798, the Prince of Condé and Maria were married in London. The marriage was kept secret for a decade, the couple reportedly becoming openly known as husband and wife only after 26 December 1808.

During the French Revolution, Louis Joseph was a dedicated supporter of the monarchy and one of the principal leaders of the counter-revolutionary movement. After the storming of the Bastille in 1789, he fled France with his son and grandson, before the Reign of Terror which arrested, tried and guillotined most of the Bourbons still living in France:  Louis XVI, Marie Antoinette and the Duke of Orleans (Philippe Egalite) were executed in 1793, and the king's sister, Madame Elisabeth, was beheaded in 1794.

Louis Joseph established himself at Coblenz in 1791, where he helped to organize a new "Court of Nobility" and lead a large counter-revolutionary army of emigres. In addition to containing the prince's grandson, Louis-Antoine-Henri de Bourbon-Conde, duc d’Enghien, and the two sons of his cousin, the late king's brother, the compte d’Artois, the corps included many young aristocrats who eventually became leaders during the Bourbon Restoration years later. This group also included Armand-Emmanuel du Plessis, Duc de Richelieu, Pierre Louis Jean Casimir de Blacas, and Francois-Rene de Chateaubriand.

In 1797, Austria signed the Treaty of Campo Formio with the First French Republic, formally ending its hostilities against the French. With the loss of its closest allies, the army transferred into the service of the Russian tsar, Paul I and was stationed in Poland, returning in 1799 to the Rhine under Alexander Suvorov. In 1800 when Russia left the Allied coalition, the army re-entered English service and fought in Bavaria.

The army was disbanded in 1801 without having achieved its principal ambition, restoring Bourbon rule in France. After the dissolution of the corps, the prince spent his exile in England, where he lived with his second wife, Maria Caterina Brignole, the divorced wife of Honore III, Prince of Monaco, whom he had married in 1798. She died in 1813.

With the defeat of Napoleon, \Louis Joseph returned to Paris, where he resumed his courtly duties as grand \maître in the royal household of Louis XVIII. He died in 1818 and was succeeded by his son, Louis Henri. His daughter, Louise Adelaide de Bourbon, who was a nun and had become the abbess of Remiremont Abbey, survived until 1824. He was buried at the Basilica of St Denis.

300,000 nobles were killed in the French revolution. The ones that escaped lost their property. The émigrés were those who fled the revolution, either for security, safety or to organise counter-revolution. There were more than 100,000 émigrés between 1789 and 1794.

Only a small proportion of émigrés were nobles, in fact, most belonged to the Third Estate. They went into exile in France’s outer provinces, other European kingdoms or across the channel in London.

London had the largest émigré population, housing around 40,000 refugees from revolutionary France. The émigrés there attempted to recreate the society and culture of the Ancient Régime.

Other émigrés, particularly those in Coblenz, attempted to organise counter-revolutionary armies. These armies were beset with problems, however, and their early military ventures ranged from ineffective to disastrous.

The new regime implemented harsh penalties against the émigrés, ordering the seizure and sale of their properties, banning them from re-entering France and promising the death penalty if they returned.

Under the leadership of King Louis XVI’s oldest brother, the comte de Provence (future king Louis XVIII), many émigrés set up a “Court of Nobility” at Koblenz in the Rhineland of Germany. One of their number, Louis-Joseph, prince de Condé, commanded an army of émigrés that assisted foreign powers in the wars against France, but the exiles never posed a serious military threat. A defeat at Quiberon Bay in southern Brittany in July 1795, in an attempt to aid a peasant revolt, resulted in the execution of over 600 émigrés.

I wasn’t until 1802 when Napoleon Bonaparte gave amnesty to all émigrés.Many Nobles continued to be part of the “Court of Nobility” and later (circa early 1800s) formed a secret Order in London where a lot of French nobles then resided, this came about because of expulsion of religious orders by Third Republic France, therefore the nobles started an Order out of spite for Third republic France.

The Legion of Honour (French: Légion d'honneur) is the highest French order of merit, both military and civil. Established in around the same period 1802 by  Napoleon Bonaparte, the First Consul, to create a reward to commend civilians and soldiers. From this wish was instituted a Légion d'honneur,[2] a body of men that was not an order of chivalry, for Napoleon believed that France wanted a recognition of merit rather than a new system of nobility. However, the Légion d'honneur did use the organization of the old French orders of chivalry, for example, the Ordre de Saint-Louis. The insignia of the Légion d'honneur bear a resemblance to those of the Ordre de Saint-Louis, which also used a red ribbon.

In submitting a petition you accept the above Terms and conditions.

PETITION HERE for Title of Princes and Princess Title.